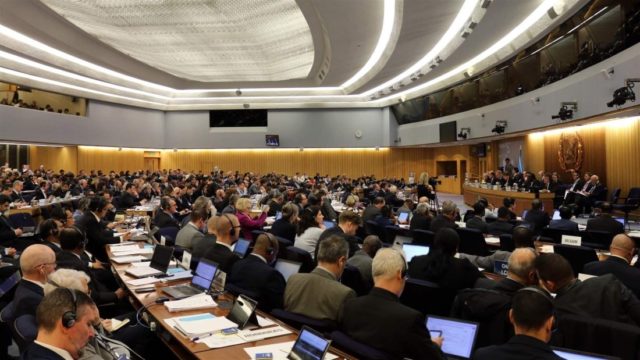 Efforts to put Cape Town Agreement on vessel safety into force has gathered momentum as more countries have signed a public declaration to have the agreement into effect by 2020.

“We now have a broader consensus on the urgent need for the Cape Town Agreement to enter into force, as a significant contribution to the long-term sustainability of the fishing industry. This work must now continue, in a pro‑active and cooperative manner, to bring the Agreement into force as soon as possible, so that fishers around the world can enjoy the safety and welfare benefits,” he said.

Forty-eight countries have signed a public declaration that they intend to bring the Cape Town Agreement into force, these include major fishing countries such as China, South Korea, Indonesia, and the United Kingdom.

South American countries have also made a strong showing with Peru, Chile, and Argentina signing the declaration.

The countries signalled their intent during the Torremolinos Ministerial Conference on Fishing Vessel Safety and Illegal, Unreported and Unregulated Fishing, which took place in Spain recently.

It will only enter into force 12 months after at least 22 states, which together have a total of 3,600 fishing vessels over 24 meters in length fishing the high seas, have ratified.

Representatives returned to Torremolinos more than 40 years after the first global treaty to address the safety of fishing vessels was adopted in Torremolinos in 1977. That agreement did not enter into force, and neither did a 1993 follow-up protocol. The 2012 Cape Town Agreement addressed the technical issues that were preventing the treaty from entering into force.

“There is no time to lose. If the fishing sector remains insufficiently regulated, fishing-related activities will continue to cause more fatalities; pollute our oceans; place [search and rescue] services at risk; and harm developing states affected by illegal fishing activities,” he said.

According to Peter Horn, project director for International Fisheries at The Pew Charitable Trusts, the vessel safety standards in many countries, such as the United States and some European countries, already exceed the requirements in the Cape Town Agreement. In developing countries, the standards will serve as a good baseline.

“In terms of building vessels, these are not very expensive or onerous requirements. You really should not be sending a vessel to sea if it’s not stable. You should never go to sea without lifesaving equipment, firefighting equipment, navigation equipment, or radio. Most countries don’t need any assistance in that part of the construction of the vessel. They need assistance putting it into law,” Said Horn

The Cape Town Agreement joins a handful of other international agreements on fishing that have gained ground in recent years.

Horn believes the agreement has the capacity to work with other treaties to combat illegal fishing.

“[The Cape Town Agreement] has the potential to work with other international treaties and instruments to help combat illegal, unreported and unregulated fishing that countries for many years didn’t think it was that important. One of the things that has changed since that period is the recognition of the level or degree of pressure on the ocean and the levels of fishing and the amount of illegal, unreported, and unregulated fishing, and the impact that’s having on societies around the globe,” he said.