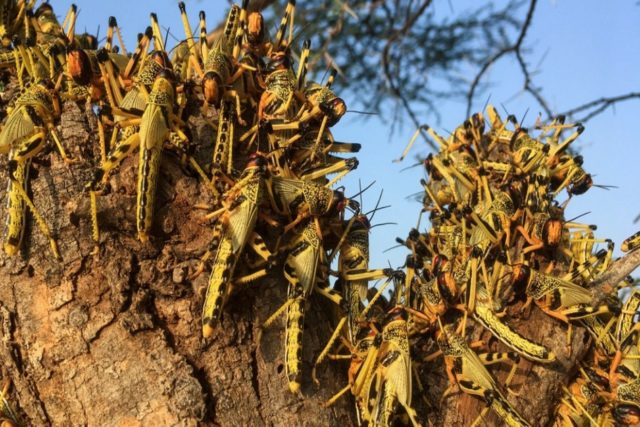 Anicia Peters, University of Namibia (Unam)’s Pro-Vice-Chancellor for research, innovation and development has revealed that the university has pledged its support because as a training facility it has a social responsibility to national goals and concerns.

Unam joined the fight against the second desert locust outbreak in the Zambezi region by tracing the areas hardest hit.

The locusts have destroyed about 500 hectares of grazing land since the first outbreak in August, according to the Ministry of Agriculture, Water and Land Reform.

The outbreak is fast spreading to other parts of the region.“Therefore, we have mobilised voluntary human resources and equipment across our various disciplines, even from our students to come and support the local team,” she said.

Peters said Unam’s immediate role is to assist the agriculture ministry in the field as part of an immediate solution while working on a longer-term strategy through research that would help mitigate such problems in the future.

“We are hoping that with this research, we will find solutions that will help us prevent any future outbreaks like this altogether. Currently, our team is in the field tracking the swarms and also finding their hotspots. This is real-time information that we are feeding to the line ministry’s officials and the defence ministry’s air force to know where to go and spray,” she said.

Peters said they are also looking into other alternative methods of complementing the ministerial spraying effort by exploring the possibility of harvesting the locusts at night by using nets to trap them. They can then be used to feed fish and poultry.

“Observations we have made so far indicate that multiple swarms are on the same migration route, and they are laying eggs as they move. This is another obstacle because the rainy season is approaching fast and they will breed again,” she said.

Peters said hopefully the joint efforts by various agencies would help contain the outbreak in the Zambezi to prevent it from spreading to other regions.

“Community members are an important part of the mitigation efforts of the outbreak because they have the local knowledge of how these swarms are moving and when the best time to spray is. Therefore, they should not hesitate to share any information with the teams on the ground,” she said.

Peters said chemicals used to spray the desert locust have been declared safe by the line ministry and told the community not to fear for their health and safety.

Minister of agriculture, water and land reform Calle Schlettwein told the National Assembly last month that the government needs about N$30 million to contain the locust outbreak in the region.