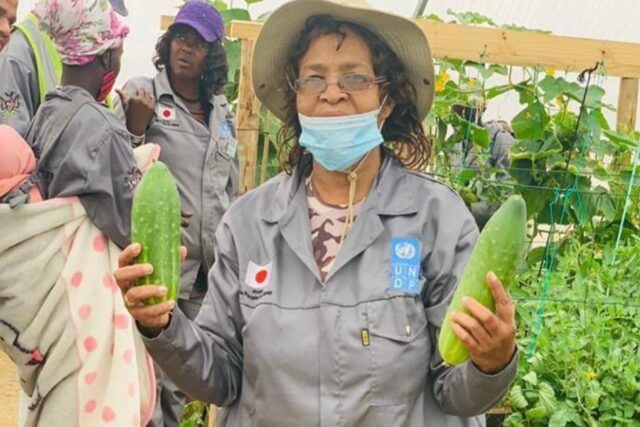 This week, her Worship Cllr Louisa Kativa, Mayor of Swakopmund, witnessed the first harvest of the Build Back Better (BBB) urban agriculture project.

Her Worship Mayor Kativa congratulated the program facilitators and the thirty project beneficiaries on their first harvest.

The BBB urban agriculture project is the result of a collaboration between the Government of Japan, UNDP Namibia, the Municipality of Swakopmund, and the Ministry of Agriculture, Water, and Land Reform.

Swakopmund City Garden makes use of both active and passive technology (greenhouses) (raised beds). The use of greenhouses and raised beds were required to mitigate the negative environmental and climate conditions in the coastal region as part of the BBB urban agriculture project, which was funded by Japan.

These innovative urban farming solutions provide a fully controlled environment, using minimal water and energy per square foot. This approach has enabled the production of leafy greens, bulbous vegetables and herbs. Currently, thirty beneficiaries, including women, youth and vulnerable persons, are directly benefiting from this garden and plans are already in full gear to scale up operations.

These interventions are focused on capacitating the production of horticultural crops that address nutritional deficiencies affecting urban communities. Beneficiaries of the Build Back Better programme will include women, youth and vulnerable persons.

The bountiful harvest from the Swakopmund Municipal gardens highlights that the BBB urban agriculture project is an excellent example of a transformative approach to food production that meets the needs of consumers, farmers and planet earth.