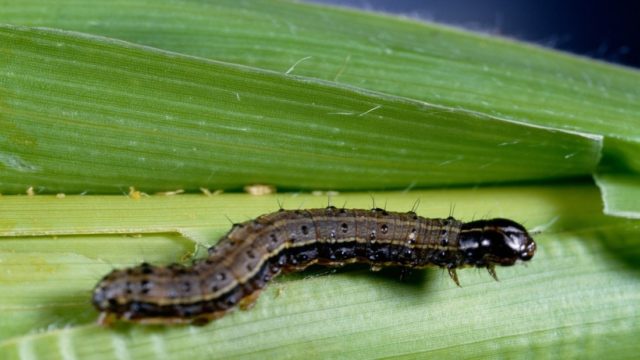 Agronomic pests are among the most detrimental hindrances to crop farmers and can result in significant losses. Although pest damage differs in severity, the bottom line is that they reduce crop yield, exaggerate production costs and ultimately make the crop enterprise unrewarding. Farmers today equate farming to gambling, as with every cropping season they are uncertain of what the outcome will be. However, it should be noted that with proper contingency planning, farmers can easily hit the Jackpot.

It should be noted that Armyworms are among the hungriest pests that destruct crop fields unapologetically and can drastically reduce yield per unit area, particularly if mitigation measures are not in place promptly. The name Armyworms is derived from their invasive behavior of attacking crop fields in groups (army). Armyworm species belong to the Noctuidae family together with other agronomic worm pests such as cutworms, bollworms, and budworms amongst others. Armyworm species are many, however, the common species include true armyworms (Pseudaletia unipuncta) that attack crops in the cold season (winter) and Fall armyworms (Spodoptera frugiperda) that attack crops in fall/summer. Thus, the name Fall is denoted from Autumn (Fall), meaning the worms usually attack crops in the fall/ summer season as they thrive in hot weather conditions.

The Oshikoto, Oshana, Ohangwena and Zambezi regions in Namibia are among the regions that are mostly affected by fall armyworms as indicated in the Ministry of Agriculture, Water and Forestry’s declaration dated 22 January 2020. Hungry armyworms attack various field crops preferably maize, however, in the absence of maize, pearl millet, sorghum, legumes and other crops including pasture grass suffer. It should be noted that Fall armyworm outbreaks frequently occur during periods of drought or after prolonged dry spells (drought) as most of their natural enemies (e.g. birds, ground beetles, and rodents amongst others) which could eliminate or reduce their numbers are suppressed during drought periods, leaving armyworms to populate. Thus, grass and plants from the recent rain that have broken the prolonged dry period of last year could perhaps trigger the current outbreak of armyworms in Namibia. Thus, this article seeks to articulate the impact of hungry armyworms and remedial actions that farmers should consider to win the battle with hungry armyworms. 2

Moths are responsible for laying eggs that hatch into larva/worms; thus, most people may observe the presence of numerous moth populations during the December and January months, more particularly at night. Female armyworm moths are ash-gray, and several research efforts revealed that one (1) female armyworm can lay egg masses ranging from about 1,500 to 2,000 at night, and usually place their eggs on plant foliage. Hatching takes place within 2 – 4 days allowing them to populate in a very short period. Researchers have revealed that heavy rains can disrupt the life cycle of fall armyworms by washing eggs off leaves and onto the ground.

If the production cycle goes undisrupted, eggs can hatch into larva which can be described as light green to cream in color with a dark head capsule. As the larva continues to feed and molt, it becomes darker with light-colored lines down the sides of its body. Thus, the adult fall armyworms can be distinguished from other worm pest species by the inverted Y on the head capsule and four dots on the abdomen. Hungry fall armyworms feed at any time of the day depending on the height of the crop and canopy. However, they are most active in the early morning or late evening hours. Most farmers believe that armyworms cause damage overnight. However, armyworm larvae can feed for a week or more before the damage becomes visible. Thus, farmers are advised to be vigilant and scout their fields frequently as small armyworms (early instars) feed less and as they grow (5th and 6th instars) their feed intake increases significantly to such an extent that the feeding patterns can be easily noticed. Thus, farmers shouldn’t wait for extreme damage to occur, close crop inspection is required to detect the pest on time.

Farmers are advised to prioritize scouting to detect armyworms and the presence of other pests in the field in a timely fashion. This is to ensure that appropriate management decisions are embarked on to inform integrated pest management (IPM). Moreover, it should be noted that the effective control of armyworms can be achieved when pesticide application is done promptly. Furthermore, it is imperative to scout in the morning and afternoon hours while pests are active and can be easily detected. Scouting can be performed in different methods, this can include V, M or Z shaped amongst others and irrespective of the scouting method employed, farmers are advised to investigate the crop leaves in their entirety. Signs to be noted during scouting include leaves that are chewed on the underside, larva excrement that resembles dark grass seeds), dead, wilted and defoliated crops (later signs) amongst others. In most cases, insecticide control is warranted when an average of three or more worms per square foot occurs. Furthermore, the scouting date and the number of pests identified should be recorded. It is observed that some farmers struggle to recognize armyworms and confuse them with similar pests such as the maize stalk borer and other worm pests. To this end, farmers are urged to visit their nearest Agricultural Extension Office for advice. 3

Integrated pest management practices are key in pest management; however, to ensure their effectiveness, scouting/field assessment is a pre-requisite, fall armyworms control ranges from physical/indigenous methods to chemical methods. Indigenous/Physical methods include handpicking, crushing egg masses/caterpillars, the application of ash/sand and the digging of trenches amongst others, these practices are commonly done by subsistence farmers. However, it is observed that indigenous control methods are uneconomical on a large scale and thus, synthetic pesticides are required to control fall armyworms.

Pesticide application can be done systematically or on contact. Thus, when selecting synthetic remedies, farmers should take cognizance of factors such as local availability, cost, correct dosage and residual activity, taking into consideration the withdrawal period. Also, agro-chemicals chosen should be among the chemicals approved by the Ministry of Agriculture, Water, and Forestry. Pesticide choices can include lambda, cyperfos, impligo, belt, and others and these can be solicited from local Agri stores such as Agra, Agri-gro, and many others. It is also important to note that research has revealed that armyworms retaliate by becoming resistant to pesticide applications. Thus, farmers should use and alternate at least two different pesticides to avoid resistance (e.g. Impligo and belt or any other). Thus, the application should be done after every 7 days and spraying should be done early in the morning and late in the evening because the pest mostly feeds at night. Moreover, the use of pheromone mass traps can be a good way to control the pest as it is proven to be environmentally friendly. Therefore, irrespective of the method chosen, the efficacy heavily depends on proper timing.

Conclusively, crop farmers are urged to seek advice regarding the invasion of armyworms from their nearest Agricultural Extension Office. The Government continues to make efforts to assist farmers particularly small-scale farmers to control army worm pests when resources allow. However, farmers who can afford to purchase the pesticides are urged to meet the Government halfway. To this end, farmers should solicit pesticide advice from Agro experts and DAPEES officials before purchasing to avoid resource wastage.