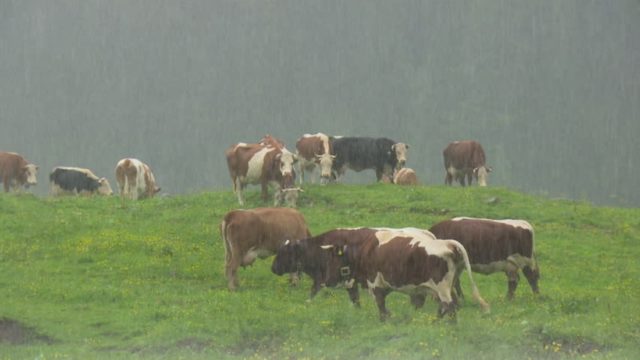 The prolonged dry spell in Namibia has put farmers under pressure to ensure that their animals survive and make it into the next rainy season. There seems to be a sigh of relief in most of the farming areas of the country (except some parts of Kunene and Erongo regions and the southern regions) as significant rainfall activities were observed during December 2019 and early January 2020. The main expectations are that the vegetation will recover and water sources are refilled to lessen the burden on livestock feeds and water provision. In certain instances, some farmers will hope to rebuild their herds and flocks.

For as much as rainfall brings relief, it is also associated with several factors that negatively affect livestock productivity and farm income. These are dangers affecting livestock health and nutrition for which farmers need to be wary of, and find means of avoiding or lessening the consequences of such dangers. A rainfall season, especially following a drought spell, can be devastating in several ways. These include lightning strikes, floods, mud traps, and diseases and pest outbreaks amongst others.

Drought affects all kinds of animals, and each animal is part of the ecosystem’s food-web for the supply of energy for survival and regeneration. The current and previous “armyworms” outbreaks in the northern crop regions (Oshana, Oshikoto & Zambezi regions), and the current “green worms” outbreak in the Omaheke and Otjozondjupa regions is one indication that pests and disease outbreak is a common phenomenon following a drought season. This calls for the adoption of appropriate and sustainable pest and disease control mechanisms.

In terms of animal diseases, the common ones that farmers should look out for include; Footrot, sweating sickness, gall sickness, and lumpy skin disease amongst others. Footrot is a bacterial infection of the hoof. It is characterized by lameness and a smelly wound on the hoof. The predisposing factors include dampness or wet soils. This can be prevented by keeping animals out of damp kraals or surfaces. The treatments include cleaning and disinfecting the wound, use of footbaths at kraals, and injection with antibiotics (e.g. Disulfox, Terramycin etc.) when necessary.

With the environment being moist, the tick population is on the rise and thus, the prevalence of tick-borne diseases such as “sweating sickness” and “gall sickness” may be expected. Sweating sickness mainly affects young calves, and the symptoms amongst others include; hyperthermia (high body temperature), anorexia (loss of appetite), sweating, hair loss, sensitivity and pain. Gall sickness (Anaplasmosis) is characterized by fever, anaemia (loss of blood). These diseases are deadly if not treated on time. They can be prevented by controlling tick infestations using applying common anti-parasitic remedies on animals such as Deadline, Pouracide and many others. Also, humans are at risk from tick bites. Congo fever is a viral disease that can be transmitted to humans through a bite by an infected tick. It is worth noting that there have been cases of Congo Fever infections reported in the country in recent years. Therefore, every person on the farm or handling animals should always take precautionary measures and seek immediate assistance from the health professionals for tick bites.

Another disease that is becoming more prevalent during the rainy season in the country is Lumpy Skin Disease (LSD). LSD is a viral disease affecting cattle and it is transmitted by biting insects such as flies, ticks, and mosquitoes amongst others. The predisposing factor is the wet environment that influences the proliferation of insect populations. Animals are vulnerable as they are found loafing around water holes and sources that are breeding grounds for insects such as mosquitoes. LSD is preventable with an annual vaccine readily available in the veterinary medicine shops.

Lastly, it is advisable that farmers keep their farming environments clean and safe for themselves and their animals, and always observe and report abnormal livestock conditions or behaviours to the nearest veterinary office or livestock health experts. The rainfall activities are unpredictable, drought seasons vary in intensity and consequences. Therefore, rigid and reactive drought management plans will not work. The plan should have adaptable management strategies before, during and after the occurrence of drought.