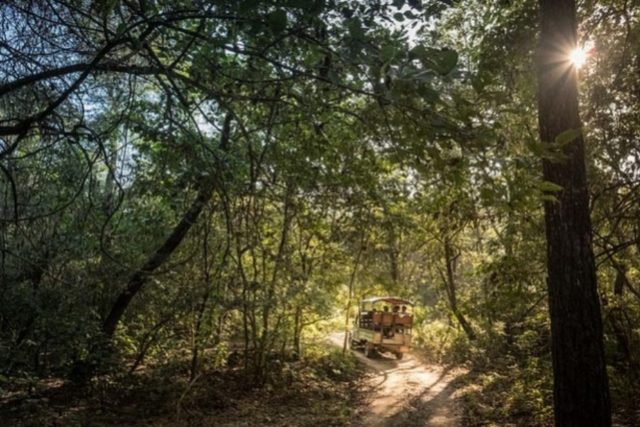 Agriculture is concerned with animal rearing and crop cultivation, whereas an ecosystem simply refers to a group of living organisms that communicate with each other in their environments, such as plants and animals, along with non-living components such as air and soil.

The roles of this natural or ecosystem co-existence include the provision of vital resources, such as habitat, food, water, nutrient cycling, as well as cultural and recreational benefits for land users. Biodiversity impacts the functioning of the ecosystem and is controlled by natural processes that sustain species abundance and distribution, and by competition between and within species.

Ecosystem structures and functions depend on or are maintained by natural perturbations (disturbances) such as herbivory and veld fires. For example, veld fires can limit species dominance, stimulate plant regrowth and seed germination amongst others.

Hence, the phenomenon of bush encroachment has been attributed to the reduction in frequency or absence of veld fires on many rangeland ecosystems.

In addition, herbivorous activities from wild animals such as elephants and other heavy browsers have been reduced. Consequently, leaving some undisturbed bush species to form thickets can displace the grass plants that would have been food for grazing animals, and also be fuel for natural veld fires.

The introduction of agriculture in these natural systems has transformed them into agroecosystems were human, livestock and crop interactions with the environment matters. It is important to identify and understand how the agricultural activities have altered or are interacting with these natural systems to make way for food production. The productivity in these agroecosystems has been compromised by unsustainable agricultural practices and climate change.

This includes overgrazing, pest and disease outbreaks, droughts, extreme temperatures and soil desiccation, amongst others.

In Namibia, the livestock and crop production systems and practices have gradually transformed some of the rangeland ecosystems such as grasslands, savannas and forests from their natural states.

This is because of human encroachment and increasing demand for rangeland resources such as forage, water, minerals, timber, and space or habitat for both humans and animals. The two most common degrading activities at the local level are overgrazing by livestock, and land clearing by humans for settlements or cropping purposes.

The grasslands in the western and southern parts of Namibia, predominated by grass and other herbaceous plants, are gradually transitioning from their dense grassy state towards desert type state ecosystems.

The savannas (e.g. camelthorn savanna in Omaheke region) which were naturally balanced vegetation of grass, trees and shrubs are facing a problem of bush encroachment because grasses have lost their competitive abilities due to overutilization.

The forest ecosystems (e.g. Kavango and Zambezi) are threatened by land clearing practices for settlements and crop fields, as well as timber harvesting.

The result of all these unsustainable practices is that the grazing lands will continue to shrink, and the most valuable perennial grasses are disappearing, thus, promoting the dominance of annual and unpalatable grasses. The soils will be exposed to erosion and extreme temperatures rendering them unstable and infertile to support vegetation or crop growth.

As far as sustainable agriculture is concerned, farmers must understand and preserve the ecological processes that drive ecosystem functioning. Contemporary agricultural practices, be it livestock or crop, should be adaptable to the basic ecological principles that promote soil health and water quality, biodiversity and conservation, protection and regeneration of rangeland resources, and sustainable socio-economic welfare amongst others.