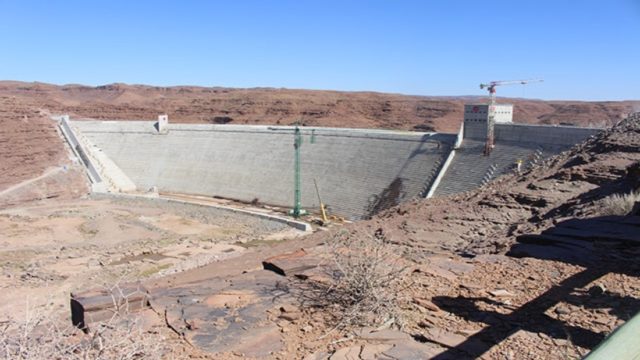 The recently inaugurated Nercktal Dam is expected to improve water supply in the south as well as boost Namibia’s agriculture production.

Namibian Vice President, Nangolo Mbumba, described the inauguration as an engineering marvel that will improve the country’s food security and provision of clean water to his country as well as a major achievement by that country’s government in meeting the developmental targets of vision 2030.

“The importance of this engineering marvel which we are witnessing today is not to be found in its display of concrete and engineering excellency as much as we appreciate such achievements. Rather the essence of this dam ought to be seen in the greater scheme of things, that of enabling and being a catalyst of water supply, a catalyst for energy generation, research and development and industrialisation and job creation,” Mbumba said.

Vision 2030 is Namibia’s economic blueprint started by the Founding President, Dr Sam Nujoma, to move the third world economy into a full industrialised nation by 2030 and has been pursued by both former President Hifikepunye Pohamba and current President Dr Hage Geingob.

Completion of the Nerckartal Dam project also comes at a time when that country has been struggling to find a long-lasting solution to water supply for both its consumption as well as to drive agriculture which has been constantly hamstrung by recurrent droughts stimulated by indefinite climatic conditions.

The Namibian Vice President added that the completion of the Nerckartal Dam project symbolizes the collective effort made by different stakeholders who contributed to its construction for over three-and-a-half years.

Mbumba said the key purpose of the Nerckartal Dam was to drive a 5-000 hectare irrigation scheme in the southern part of the country where they cultivate lucerne, table grapes, dates and other crops while providing other secondary benefits of sports tourism.

He said the irrigation scheme will improve food self-sustenance for the country while contributing immensely to foreign currency earning through the export of Namibian grapes.

Mbumba also called on all stakeholders to utilise the created water source to the full benefit of the country.

Vice President Mbumba also reiterated that the Nerckartal Dam will produce 3.5 megawatts of power which will be ploughed back into the national grid.

“This is the largest dam in Namibia which at full supply level has a storage volume of 857 metres of water and will stretch more than 38 kilometres and has a circumference of more than 290 kilometres. I have been reliably informed that during construction 3000 Namibians were directly employed on the site while an estimated 2500 indirect jobs were created in Keetmanshoop and surrounding areas of which 65 per cent emanated from this region,” he said.