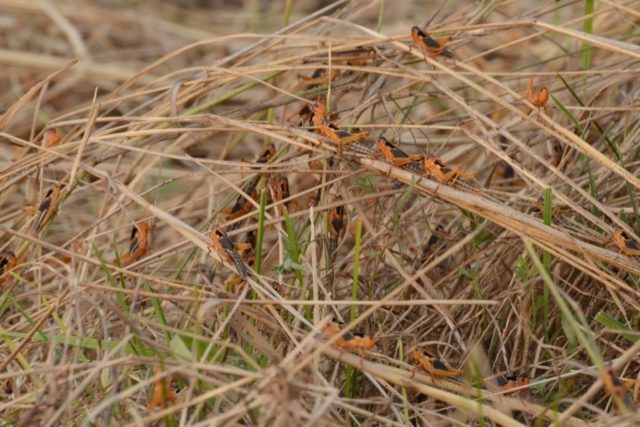 The Ministry of Agriculture, Water and Land Reform has said at least 50,000 hectares of cropland in Namibia have been destroyed by AFRICAN migratory locusts (AML) and new swarms have been spotted in the Zambezi region.

The Zambezi region was the first part of the world in February last year to encounter an outbreak of locusts that later affected farmers in nine of Namibia’s 10 crop-producing regions.

By that time a second invasion had hit the nine regions and more than 500 km2 had been attacked.

Agriculture executive director Percy Misika yesterday told The Namibian that adult AML and red locusts are still prevalent in areas such as Kapani, Old Masokotwane and Linyanti, which are now the epicentres.

“There has been a reduction in the locust population, however, new hoppers are being spotted which means hatching is taking place. The hoppers and immature flyers are also present in the flood plains,” Misika said.

To date, the ministry’s spraying team has covered 20 000 hectares and they are planning to cover more because their surveillance area is about 300 000 hectares. The ground covered does, however, depend on the swarm clusters as the population increases.

In Kavango East and Kavango West, a total of 340 hectares have been covered of which 270 hectares are of the green schemes, mainly at Shitemo, Ndonga Linena, Uvhungu-Vhungu and Sikondo as well as 70 hectares within the community.

“Our extension officers are still receiving calls from some of the green schemes because of new hoppers being spotted. There are reports of fliers from all constituencies in the two Kavango regions. The ministry continues to mobilise resources to fight and contain the further infestation of crop and grazing land by the locusts,” Misika said.

Furthermore, the Food and Agriculture Organisation of the United Nations (FAO) early last year warned that the outbreaks are threatening the food security and livelihoods of millions of people in southern Africa.

According to the Integrated Food Security Phase Classification (IPC), about 2,3 million people in Zimbabwe, Zambia and Namibia are already facing acute food insecurity (IPC Phase 3) and are likely to be seriously impacted by the locust invasion.

The AML is a trans-boundary pest capable of flying long distances and severely affecting crops, pastures as well as food security, nutrition and livelihoods.

The ministry’s spraying teams late last year had problems after neighbouring countries sprayed their fields as the locusts migrated from one country to the other.

About 1,1 million hectares have already been destroyed, according to the Food and Nutrition Security Working Group (FSNWG).