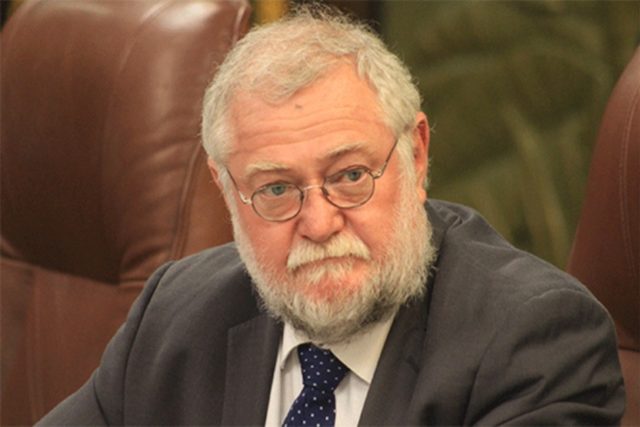 Calle Schlettwein, the Minister of Agriculture, Water and Land Reform, believes that mining activities should no longer be permitted in areas that rely on groundwater resources.

Schlettwein said the government should also hurry to stop possibly hazardous exploration and other mining activities currently taking place in regions that have been proclaimed water reserves during the introduction of the third edition of Namibia’s hydrogeological map in Windhoek on Friday.

This is to prevent groundwater reserves from being contaminated and rendered unfit for human consumption.

“We would be foolish to allow competing for commercial activities to threaten these groundwater reserves. I believe mining in an aquifer must, in any event, be carefully considered and probably prohibited upfront – especially if the minerals are available in alternative localities,” he said.

“I believe the idea to declare the whole country as a water reserve is fine, but we must be more specific. There are places where water reserves are less abundant and available . . . in those areas, we must have a different set of rules when it comes to usage or competing activities.”

This is due to the fact that Namibia uses about 60% of its groundwater resources.

“As a semi-arid country that is highly vulnerable to climate change and variability, evidence-based sustainable management of groundwater resources is a necessary condition as the country implements its socio-economic development agenda across generations,” Schlettwein said.

Such activities, Schlettwein said, pose significant risks to areas that are already drought-stricken.

“The fact is that mining and leaching are taking place within the aquifer, and the polluted water is disposed of back into the aquifer. This aquifer is far too valuable for a community that lives in the Kalahari. We cannot take the risk of destroying it or making it less valuable in that community,” he said.

Namibia’s hydrogeological map was first published in 2001, and for the second time in 2011.

The updated map and handbook launched on Friday contain reliable and updated information about the occurrence, quality, utilisation and vulnerability of groundwater resources in the country.

Namibia, through the Ministry of Agriculture, Water and Land Reform, is part of the Southern African Development Community (SADC) Groundwater-Management Institute.

Through this institute, Schlettwein said, Namibia accessed a grant of more than N$2 million, or US$150 00, from a funding commitment of more than US$10 million provided to SADC countries by the World Bank in 2016.

This money is aimed at funding activities to improve the region’s hydrogeological data, “which is immensely important for planning and managing groundwater resources sustainably”.

According to the minister, the grant focused on one subcomponent of the project, which included activities such as the improvement of infrastructure for groundwater utilisation, management, and protection, among others.