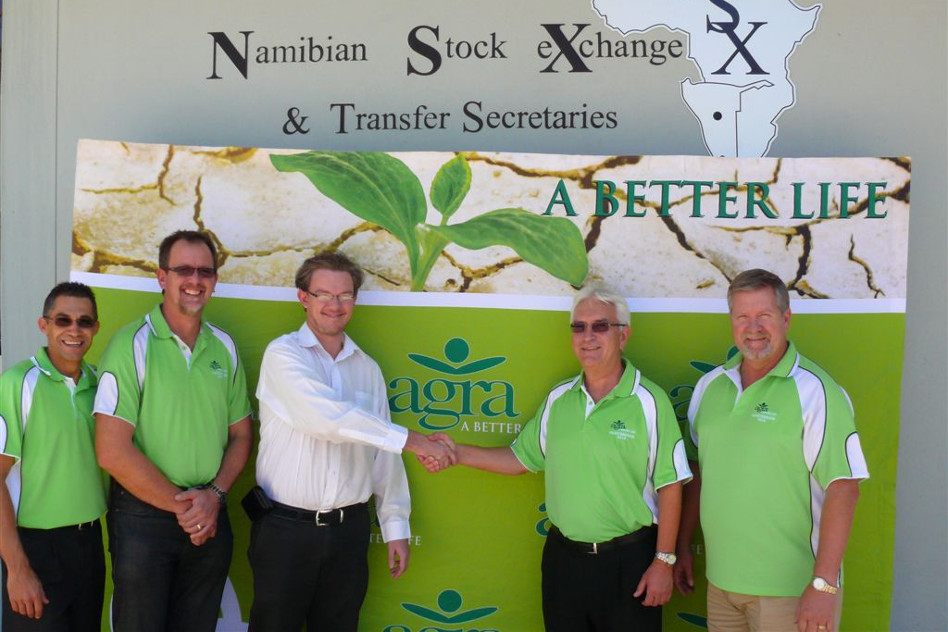 “His guidance and management of Agra can be considered as one of the largest contributions to agriculture by an individual after independence.” With these words James Chapman summed up Peter Kazmaier’s career of twenty years at Agra. Agra management, board members and invited guests said goodbye to Peter Kazmaier as CEO of Agra at a farewell party on Wednesday, 28 October 2015 in Windhoek. Kazmaier, who retires on 31 October, served as CEO of Agra for twenty years.

Kazmaier started his career at Agra in 1995 when the business was at an all time low but looks back at a number of achievements and challenges that have been overcome. At the function he sketched the Agra he entered in August 1995 and the challenges he faced at that stage and shared the highlights and milestones achieved and celebrated over the twenty years as CEO of Agra.

James Chapman, who was the Chairman of the Board of Agra in 1995 when Kazmaier was appointed shared with the guests the board’s decision and process to appoint Kazmaier. The board at that time had a very important task to appoint the right person as CEO. They knew exactly the magnitude of the task that lied ahead for him at Agra, which was in the tough world of trade with 5000 members who, for shares of N$50 each, all had a say, needs and requirements. “There were no soft loans, no infant protection, but members’ desires for improvement and change and financial demands,” Chapman explained. He commended the way in which Kazmaier and his team provided in the needs of clients and shareholders with that which was financially achievable.

“He started as an outsider with no experience of or exposure to the agricultural sector”, said Ryno van der Merwe, Chairman of the Board of Agra, in his farewell message. Van der Merwe said that despite this and the complexity of Agra’s business, Agra was turned around and guided to grow from a turnover of N$413 million and a nett loss before tax of N$2,3 million in the 1995/1996 financial year to a turnover of N$1,3 billion and net profit before tax of N$55 million in 2014/2015. Van der Merwe described Kazmaier as “a person who was loyal and dedicated and who always put Agra first”. “Today Agra is a respected and important role player in the Namibian economy, which was achieved under your leadership”, he said as he wished Kazmaier a happy retirement.

Good retirement wishes also came from the Swakara (Karakul) Board of Namibia through their chairperson Raimar von Hase. He shared the desperate times that the Swakara industry went through and that Agra never let them down through all the tough times.

Arnold Klein, who takes over as CEO of Agra from Kazmaier confirmed that they had to ‘navigate many storms’, in the time after he started his career at Agra. Klein was appointed as General Manager: Agra Retail and Wholesale in 2003 and at that stage there were also many challenges that had to be addressed, some through very difficult and drastic steps. “Together we have accepted the challenges, implemented business solutions and conquered the seemingly impossible”, said Klein. He made his commitment to continue leading Agra to new heights.