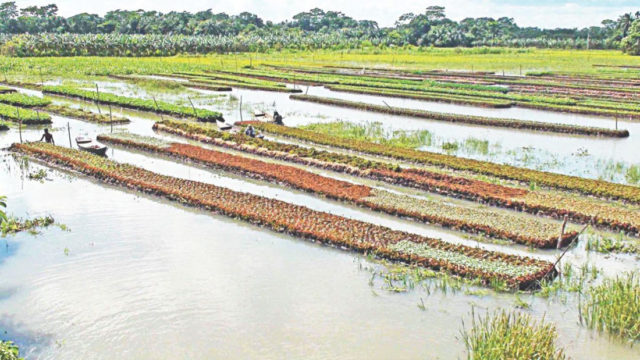 Under a project focused on sustainable food production and bringing urban dwellers face-to-face with the origin of their food, the Port of Rotterdam in the Netherlands saw 32 cows board the world’s first floating farm.

The project also sought to address the issue of feeding a growing population with limited land space, according to Dutch property company Beladon that owns the farm.

Peter van Wingerden, the project initiator at Beladon alluded that floating farms are the perfect scalable solution for cities such as Rotterdam, with a lot of space on the water

“We believe that building on water is the way ahead in a country with a changing climate and ever-increasing urbanisation,”said Peter.

Facilities on the floating farm included a spacious shed for the cows with large stalls, a milk robot, slurry robot, automatic belt feeder and a rubber floor.

A bridge between the farm and the dock would allow the cows to have access to an adjacent pasture, a report on the company’s website said.

The structure was as self-sufficient as possible and made use of floating solar panels that provided all energy needs, while a rainwater capture mechanism on the roof would both collect and purify the water.

The cattle’s feed said to be sourced from the city, would be as sustainable as possible and would include brewers’ grains, bran, potato scrapings, as well as grass from sports fields and golf courses in the city.

The key aim of the floating farm concept was to shorten the transportation time of food from where it was produced to consumers, thereby reducing food losses and minimising pollution stemming from transportation, the report said.

Expectations are that the dairy products to be produced on the floating farm would be supplied to local grocery stores in and around Rotterdam.